Well we have finally reached Friday, thank God! And unlike other people the week and leads me really into my working week because, as an event and portrait photographer my working hours are when people having events and have the time to get their portraits done.

It also means I get to meet a whole range of fantastic people, and I get to see such amazing sites to which I feel really blessed. And I know this little Canberra event photographer really enjoys and appreciates every moment I get to spend with not only new and exciting people but catching up with old friends.

Now I’m not sure if I’ve shared this photo publicly, but it is a photo that I really enjoyed taking for many reasons. One of which I got to meet a friend which I had spoken to for many years online but had never met in person where I had the opportunity to give a one-on-one photography coaching session, where we concentrated on landscape shooting along with how to use speed lights on location in a practical sense to ensure that you could capture images as they were seen through our own eyes. It was also a fantastic opportunity to get up early and get some early-morning photos of what was splendid but kind of chilly morning. 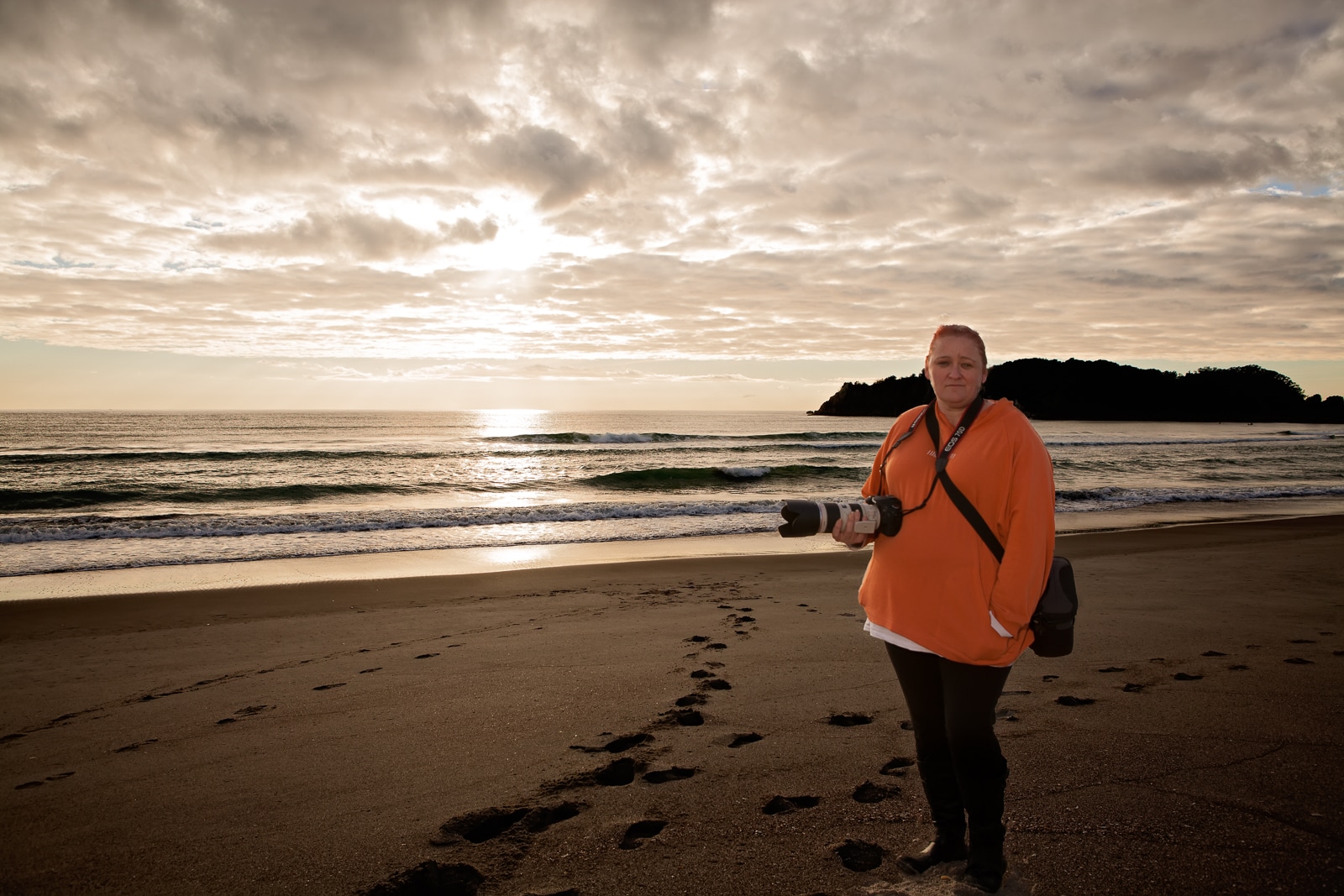 This photo was taken while I travelled to New Zealand to cover the New Zealand salsa Congress in the beginning of June this year.

It was also part of my travels after the event were grabbed a car and drove all around the North Island with my daughter capturing and visiting some of the most amazing places and this was just one of those places.

For the shot we were looking out over the Bay of Plenty at Tauranga on the north end of the North Island of New Zealand. The island you can send the background is Moturiki Island and while the image appears quite dark this was certainly not the case on the day as the sun was shining and we were shooting directly into the light.

Our anyone that has done this would certainly know that it is impossible to get an image like the one you are seeing, mainly because that the sun would overpower the camera and cause it to expose in such a way that the subject in the foreground would be silhouetted.

To get around this I used my portable speed lights to bring the subject up to the same exposure as the background. I also applied a neutral density filter to the lens of my camera to bring the sunshine back down to a level that was acceptable and able to be captured within camera. As with everything with photography and in life, everything has a side effect or a cause-and-effect. The side-effect of adding a neutral density filter is that the image naturally get starker however it also goes along and requires a longer shutter speed to achieve and capture an image. While in most cases this is not necessarily an issue as it is in effect which you would like to achieve, in the event scratch that in this shot I wanted to capture a person, someone that I required to be very still and without motion blur. The cool thing is in using flash I’m able to achieve this as this is a side-effect of using flash. It will freeze the person or subject to which the flash is directed, while everything outside of that flash is left to be exposed by the camera. Which can have some softness due to motion blur or the subject in the foreground is completely sharp.

One of the other key points of this photo scratch that one of the other key points to this photo is that the colour balance of speed light is different to the colour balance of the rising sun. Rising Sun is a much warmer colour than the colour that comes out of a speed light. To get around this I also applied what is referred to as a gel. Gels come in many different colours into many different things but for the purpose of this I used an orange gel which change the colour of the speed light to match the warm colour of the sun which ensured that the subject in the foreground gave the appearance that the light falling on her was more natural than man-made.

If you want to know more about photography and in particular get some photography lessons let me know, as I’m putting together a course material for photographic workshops beholding over the next year, some of these being on location landscape shooting along with how to use artificial lighting to bring out the best in your subject, the matter the location.

Well I have to run as I have some planning and things to get done for my weekend shoots,

Hope y’all have a fantastic day which is in essence the last day of your working week, and I hope to see some of you over the weekend even if it is from the other side of the camera.

This site uses Akismet to reduce spam. Learn how your comment data is processed.